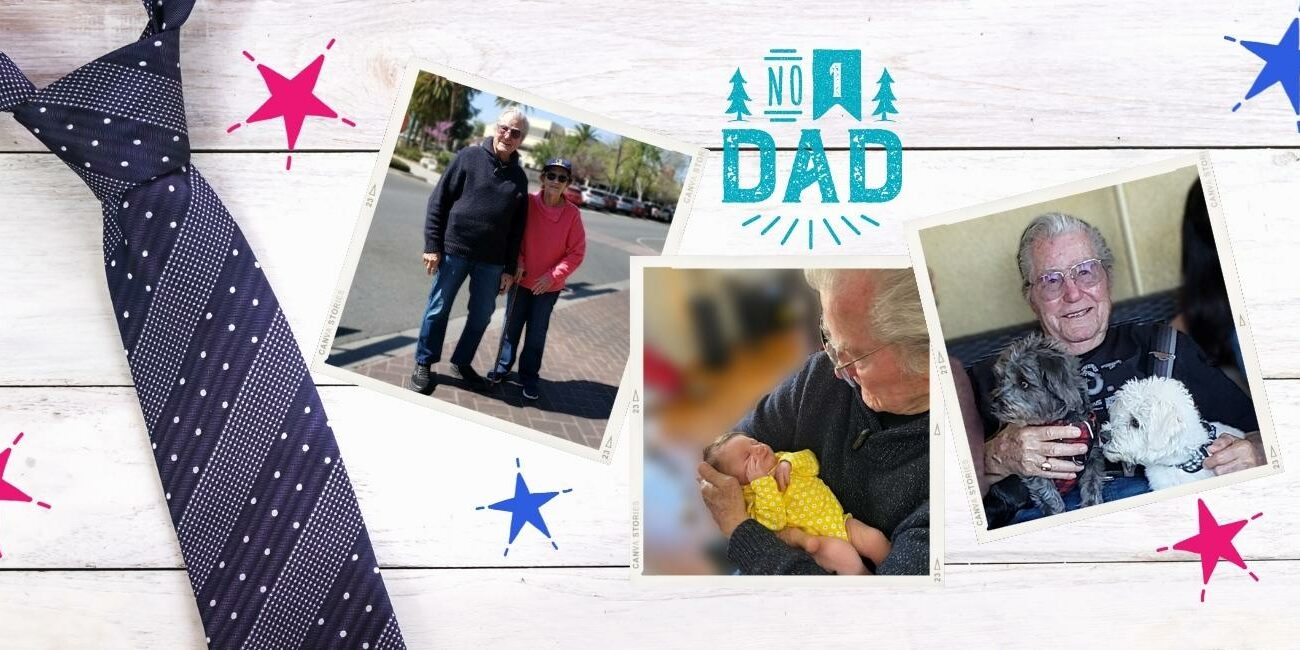 In honor of Father’s Day

Dad. Daddy. Daddio. Pop. Padre. Papa. Father. There are so many different names to call the man who raised us. Yet no matter what term of endearment we use to address our dads, we celebrate them all on the third Sunday of every June—Father’s Day!

Father’s Day 2022 falls on June 19th, right around the corner, so it’s time to pay tribute to all the dads out there who’ve made a lasting impact on our lives. Here’s to the biological, adoptive, and foster fathers—those who’ve played the part, even without the title. Father’s Day is a wonderful time to celebrate and share gratitude with the men who have helped us become who we are. We honor you just as we celebrate the younger generations of dads raising their children.

From the grown-up versions of us—Dads, may you recognize the fruit of your love and labor. See reflected the impact you have made in our and your grandchildren’s life.

Why We Celebrate Father’s Day

Father’s Day celebrates and honors the men who have embraced the essential role of fatherhood. On this day, we also thank fathers and father figures (uncles, grandfathers) for their sacrifices, for assuming the responsibility of nurturing and raising children, and for devotion to their families.

In 1910, Washington state marked the first commemoration of Father’s Day thanks to the effort of a woman named Sonora Smart Dodd. As the story goes, it all started when Dodd, who attended a Mother’s Day service at a church and thought, “what about fathers?” One of six children, Sonora had a wonderful, hard-working father. She thought he should be honored for his exemplified fatherly love and devotion in raising her and her siblings by himself.

In 1916, President Woodrow Wilson celebrated Father’s Day. Calvin Coolidge encouraged state governments to observe Father’s Day in 1924. Unfortunately, it was not until 1972, 58 years after Woodrow Wilson made Mother’s Day official—that the day honoring fathers because a nationwide holiday in the United States. In the middle of a hard-fought presidential re-election campaign, President Richard Nixon finally signed a Congressional resolution declaring the third Sunday in June to be Father’s Day. Six years before Sonora’s death at 96. Her dad, no doubt, would have been very proud. Today, economists estimate that Americans spend more than $1 billion yearly on Father’s Day gifts. (That is a lot of ties and BBQ sauce!)

In this month’s blog, we would like to share one of our beloved founding fathers, Barry Gerson. Here is his story:

Born in 1934, Barry Gerson grew up with a strict father who showed him that putting in a good day’s work was important, not only to make money but to show respect and have a sense of pride. As stubborn as his father, Barry left the house at age 16.

With a desire to serve his country, he enlisted and served in the Navy at 19. Barry became a Hospital Corpsman and soon after that was attached to the Marine Corp. Barry was at the top of his class and was to be dispatched to the Korean War – but since it was winding down, he did not have to go.

In 1956, Barry wanted to be a fireman like his dad and pursued that career path while still in the military. Upon completing his four years of Military service, the LA City Fire Dept accepted him in 1958. During his time in the department, he was a part of and witnessed some historical events in California. The Watts Riots in 1965 and battling the Belair/Brentwood fire rocked the city in a firestorm for weeks.

Barry’s father’s career as a fireman was cut short due to a broken back he sustained on the job. However, that didn’t stop him from grabbing Barry’s brother and starting his own printing business in 1968 called Universal Blueprint and Supply Company. The company began to grow, and Barry would help during his fireman days off by doing odd jobs, cleaning up, sweeping floors, and whatever else was asked of him.

His dad suddenly passed away, and his brother needed help running the family business. With Barry married with children to support, he retired from firefighting and began working with his brother in blueprinting. As they say, the rest is history, but not entirely!

Barry finds himself back in school learning business and accounting, which comes in handy when his brother retired in 1975. Barry decided to take over the blueprinting business. He renamed it Universal Reprographics, South in Orange County. Through relationship building and customer service, become one of the most trusted, successful print shops in the area. Barry grows the business, gathering dedicated employees who become family, attracting customers who become friendships, and becoming a founder himself in the reprographic industry. Barry retired and sold his business in 2001.

Funny thing, his daughter decided to follow in her dad’s footsteps and bought a printing company! Now he has come full circle. Barry helps his daughter’s company by driving, cleaning up, and sweeping the floors like he did when he helped his dad decades ago.

At A & I Reprographics, he brings a balance when he visits. Barry always has that welcoming smile and the willingness to help. He is an excellent example of a great work ethic even now when he doesn’t have to or be expected to. Barry doesn’t sit still very often. He takes care of his dogs if he isn’t shopping, delivering, or visiting family.

Barry has genuinely lived his 87 years with a handshake and a smile. He was a son, a Navy Corpsman, a Marine, a firefighter, a scuba instructor, and a brother. He is a great friend. Barry is a husband to the love of his life and high school sweetheart, Glenda, of 66 years. A father, a grandfather, and now a great grandfather.

He traveled and saw much of the world as well. Barry has been to Europe, Africa, Scotland, and Ireland; he cruised to Alaska, trips to the Caribbean and Mexico, and rafted down the Colorado River. One of his favorite places to visit and one he wouldn’t mind returning to is Germany.

Barry Gerson, we celebrate you every day. For your kindness and dedication, your spirit, and your positive energy. For being a loving father, you have always been to all of us. We thank you and love you.

CELEBRATE YOUR DAD EVERY DAY OF THE YEAR!

Only a dad, but he gives his all

To smooth the way for his children small,

Doing, with courage stern and grim,

The deeds that his father did for him.

This is the line that for him I pen,

Only a dad, but the best of men

Custom gift wrapping paper to printing memories onto wood, aluminum, canvas, and more. Ask US how.

Glenda Gerson the “Lifetime Achievement Mom”
May 5, 2021
Go to Top