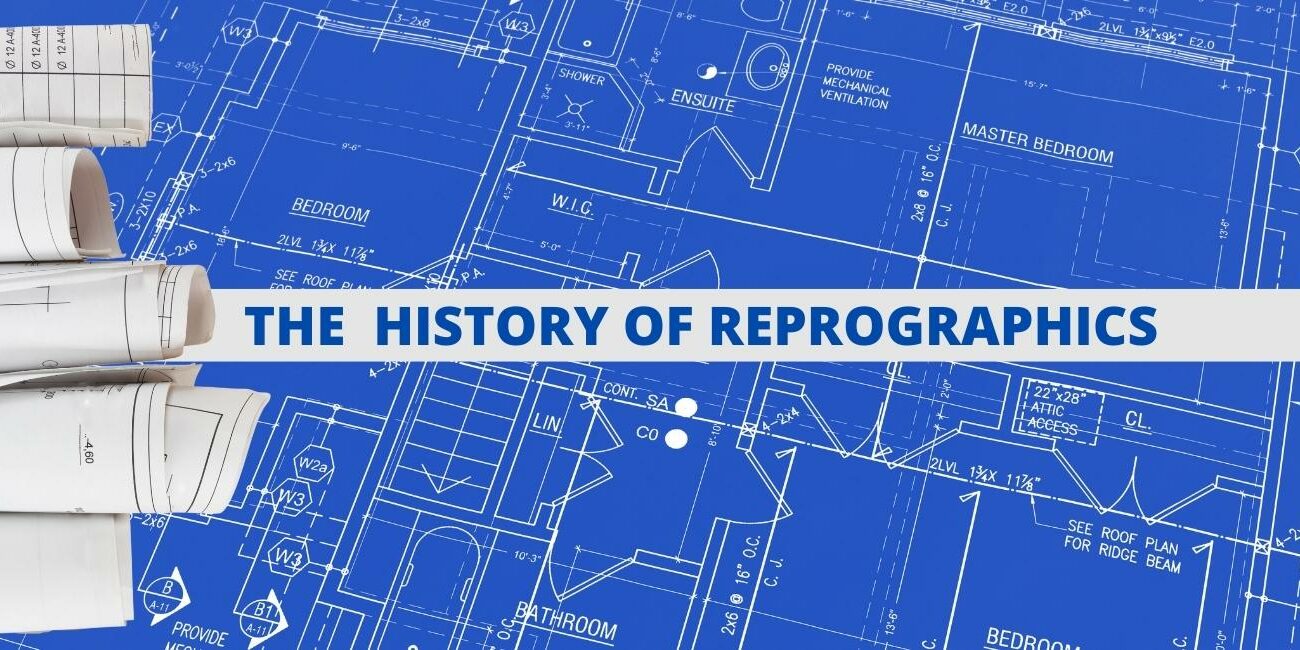 Back to Basics-What is Reprographics?

What Does Reprographics Mean?

Reprographics is the process of reproducing graphics through electrical or mechanical means such as photography or xerography. Photography and printing services are the most significant examples of businesses and entities using reprographic equipment. In simplest terms, Reprographics is the reproduction of visual elements such as graphic images and even text documents as print or digital data.

Reprographics is also Known as Reprography.

In a more straightforward explanation, Reprographics is a blanket term encompassing multiple methods of reproducing content, such as scanning, photography, xerography, and digital printing. The term applies to physical hard copy and digital soft copy printing reproductions of documents and images.

Reprographics is the reproduction and duplication of visual materials such as documents, drawings, images, designs, and the like through any process using light, optics, or photographic means. The term also refers to the reproduction of the said materials through all or any printing methods, including photocopying.

Reprographics Services allow you to recreate graphics in the original size or scale them smaller or larger depending on your needs. These images can then be used for marketing purposes on posters or billboards, signs on windows, wallcoverings, or replicated into brochures, magazines, postcards, and any other printing need.

Typical reproduction methods include diazo (blue-line), electrostatic (xerographic), photographic, laser, and inkjet. Reproductions can be the same size or smaller/larger than the size of the originals. Today, it broadly includes multiple content reproduction methods, such as scanning, photography, xerography, and digital printing of documents and images in both physical (hard copy) and digital (soft copy) formats.

In the past, the architectural, construction, and engineering industries were the primary users of reprographics technology. Now reprographic printers have added more options attracting a diverse clientele. Corporate business, real estate, law offices, school districts, municipalities, and advertising executives have taken advantage of reprographics services such as enlargements, mounting, signs, outdoor graphics, and more. The printing industry has evolved into a “one-stop shop” catering to anyone who seeks professional printing services.

Despite the growth of online graphics and advertising, “blueprints” are still the primary choice of architects, along with other forms of reprographic printing such as construction signage, banners, bid documents, posters, wall art, and so much more. Reprographic services are invaluable to anyone who needs a cost-effective way to make a creative impact. The bread and butter of Reprographics was the blueprint and blue-line products servicing the Architectural Engineering and Construction (AEC) Industry.

If you have a blueprint for success, you’re not alone. At least when it comes to the “blueprint” part. The word “blueprint” has become a part of a global lexicon used to symbolize a plan, strategy, or framework. But what is a blueprint, really?

A blueprint is the standard means of communicating during construction, whether a new house is being built or adding on to an existing one. Blueprinting is used to copy large architectural and construction drawings at their most basic. A blueprint is a reproduction of an image that already exists. Engineers and Architects use these large-format prints to illustrate project plans using white lines and text on a backdrop of blue. And it’s not just because they happen to really like blue. Despite its accidental invention, it became a standard in the AEC industry.

Putting the Blue in Blueprint

The story of the evolution of Prussian blue has all the elements of a dark fairy tale.

In 1704, an alchemist and dye maker shared a laboratory in Berlin, Germany. Johann Knorad Dippel sought to create a universal remedy that treated everything from animal mange to human epilepsy. By boiling hooves, horns, and leather, he only created a very smelly elixir that cured absolutely nothing. Another fellow chemist, Diesbach, made batches of vibrant dyes using insects, alum, iron, and sulfate. One day they combined the two thick mixtures, creating a blue as deep as the night sky. They both realized that Ox blood mixed with the iron sulfate caused a chemical reaction and turned a brilliant shade of blue. Unlike other blue dyes that were difficult to make and easily faded, this blue remained vivid. It would have been a fascinating historical moment to see the lab partners’ faces as they witnessed their concoction turn a deep and unexpected blue. Until this discovery, blue was difficult and costly to make. It required ingredients like lapis lazuli, which cost more than gold at that time!

Initially, the first blue dye was appropriately named Berlin blue because of its birthplace. Eventually, the dye was used for Prussian Army uniforms and was referred to as Prussian blue. The color became a symbol of aggression and a term of endearment because of the army’s fierce battles and serendipitous interventions in the conflicts like the Battle of Waterloo.

By the late 1800s, Prussian blue had found favor with impressionist artists and Japanese printmakers. As the 1900s wore on, it became the hue of newspaper ink, typewriter ribbon, and eye shadow.

For Sir John Herschel, son of the celebrated astronomer William Herschel—who, with the discovery of the planet Uranus, revolutionized the modern-day conception of the universe—science was in John Herschel’s blood. Following in his father’s footsteps, Herschel himself became a renowned astronomer. Herschel also applied scientific exploration to art and participated in some of photography’s earliest experiments.

During his quest for color, Herschel carefully documented his experiments with hundreds of variations of chemical formulas. Herschel discovered that combining ferric ammonium citrate and potassium ferricyanide created a chemical reaction called blue ferric ferrocyanide or Prussian blue. This process was called cyanotype.

Cyanotypes were not widely used until 1880 but are one of Herschel’s most influential contributions to the art of photography. Not only does it lend itself to strikingly beautiful photos, but the cyanotype is also the originator of the architectural blueprint.

The cyanotype process was widely used in 1930 since it allowed people to quickly make an unlimited number of copies.

Eventually, Prussian blue became as crucial for its practicality as its novelty, but not while John Herschel was alive to see it. The use of blueprints as a simple and inexpensive way to reproduce architectural drawings wasn’t recognized until five years after his death.

Blueprint, in its essence, is a denim blue color, but not just any denim blue. Visualize blue jeans, and the color captures that perfect middle-of-the-road blue denim color- not too dark, not too light, slightly worn to keep it comfortable, but with enough color to be easily dressed up.

In the early 1940s, the cyanotype blueprint was supplanted by diazo prints, also known as whiteprints. This technique produces blue lines on a white background. The drawings are also called blue-lines. Other comparable dye-based prints at that time were known as blacklines.

By the 1970s, the blueprinting process was a dying art in the U.S. because new technology was becoming more prevalent. Xerographic copies could create duplicates with a push of a button. And by the 1980s, the architecture, engineering, and construction industries were moving from hand-drawing to computer-aided design (CAD) that could automatically be changed on the screen and printed on large-scale paper. No more paste-ups and taping changes to vellum paper anymore.

Most people today still associate any construction drawing with blueprints. But due to modern printing methods, print shops no longer need to put the drawings through the chemical process that makes them blue. Plan sheets and drawings are now printed black and white on high-speed copiers without the smell or danger of ammonia-based chemicals.

Plans are typically printed on 20# Xerographic white bond paper instead of yesteryears Blueprint/Diazo ammonia-based paper, Vellum, Cad paper, or Engineering Bond. Printing on Mylar is still requested mostly for Municipalities, but this is declining and may soon be a thing of the past. Mylars do not have a long shelf life if exposed to heat. They get crisp and crack. The same happens to old blueprints and blue-lines.

Blueprints will often fade if housed in an alkaline environment. Signs of image deterioration include tonal shifts from blue to yellow or brown, with the image progressively turning white over time. They fade terribly in the sun and heat. Everything that was once printed will no longer be visual.

If you have any of these in storage and want to preserve the integrity of the information, you need to have them scanned and archived onto a hard drive, CD, or other digital processes as soon as possible. Time is not kind, and your information will be lost.

Scanning is the best way to preserve yesterday’s valuable information. A&I can help you evaluate the best course of action for your archival project. We are experts in this essential process and will make your digital copy easy to retrieve. The information you need is readily accessible in minutes instead of digging through rolls of plan sheets stored in an unorganized storage facility or closet.

Got a room full of paper files or plans? A&I document scanning, digitization, and archiving services can help turn your documents and records into paperless digital data. We create organized and functional archiving and electronic filing systems that are searchable, accessible anytime, and secure.

The next time you hear the word Reprographics, think of printing. A&I services have evolved to a level that fits everyone’s budget and expectations. We are just a call away from helping you with your next project.

Visit our shop and meet our team. We are not yesteryear’s “blueprinter.” A&I is your full-service print shop.